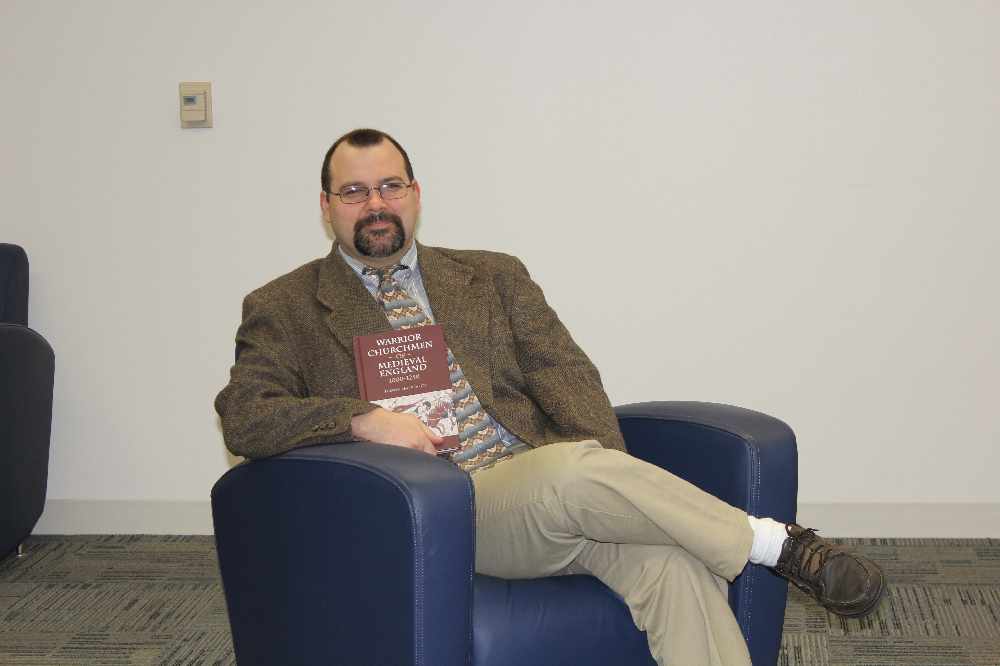 Dr. Craig M. Nakashian with Texas A&M -Texarkana has released a new book that digs into the activities of the "Warrior Churchmen of Medieval England"

Dr. Craig M. Nakashian, tenured associate professor of history at Texas A&M University-Texarkana, has released a new book that delves into the activities of medieval clergy in times of war. With medieval, military and religious history scholars and enthusiasts in mind, Boydell & Brewer Publishers released Warrior Churchmen of Medieval England, 1000-1250 Theory and Reality on Dec. 15. The book received top-billing in Boydell & Brewer’s announcement in the December 2016 issue of the English Historical Review, which is among the most prestigious academic publications on history in the world.

“Christianity has had a problematic relationship with warfare throughout its history, with the Middle Ages being no exception,” Dr. Nakashian said. “While warfare came to be accepted as a necessary activity for laymen, clerics were largely excluded from military activity. Those who participated in war risked falling foul of a number of accepted canons of the church as well as the opinions of their peers.” Dr. Nakashian said many clerics continued to involve themselves in war - including active participation on battleﬁelds. His book, focusing on a number of individual English clerics between 1000 and 1250, seeks to untangle the cultural debate surrounding this military behavior. It sets its examination into a broader context, including the clerical reform movement of the 11th and 12th centuries, the development of a more comprehensive canon law, and the popularization of chivalric ideology.

“Rather than portraying these clerics as anachronistic outliers or mere criminals, this study looks at how contemporaries understood their behavior, and I argue that there was a wide range of views - which often included praise for clerics who fought in licit causes,” Dr. Nakashian said. “The picture which emerges is that clerical violence, despite its prescriptive condemnation, was often judged by how much it advanced the interests of the observer.” Dr. Nakashian’s interest in the topic was piqued while writing a paper in graduate school at Durham University in Durham, England, where he earned a Master of Arts in Medieval History. His research continued at the University of Rochester while writing his doctoral dissertation.

A member of the A&M-Texarkana faculty since fall 2010, Dr. Nakashian teaches courses including Medieval Civilization, Sex, Swords and Sorcery: The Medieval World in Anglo-American Film, Augustus Caesar to Charlemagne, Crusades, Councils and King Arthur: Europe in 1215, and World Civilization I and II. His research interests include medieval England and France, religious and military culture, and chivalry and the church. He also serves as director of the University Honors program and coordinates the freshman convocation each fall.

Dr. Nakashian will present a University Honors colloquium titled “‘A New Kind of Monster…Part Monk, Part Knight’: The Debate over Warrior Clerics in Medieval Europe” on Thursday, Jan. 26, at 6 p.m. in the Tri-State Iron & Metal Atrium on the third floor the University Center on the A&M-Texarkana campus, 7101 University Ave., Texarkana, Texas. A question-and-answer session and book signing will follow.

The book is available on the Boydell & Brewer website at boydellandbrewer.com. It is also available online from retailers, including Barnes and Noble, Amazon, Books-A-Million, Target, Walmart, IndieBound and Wordery.