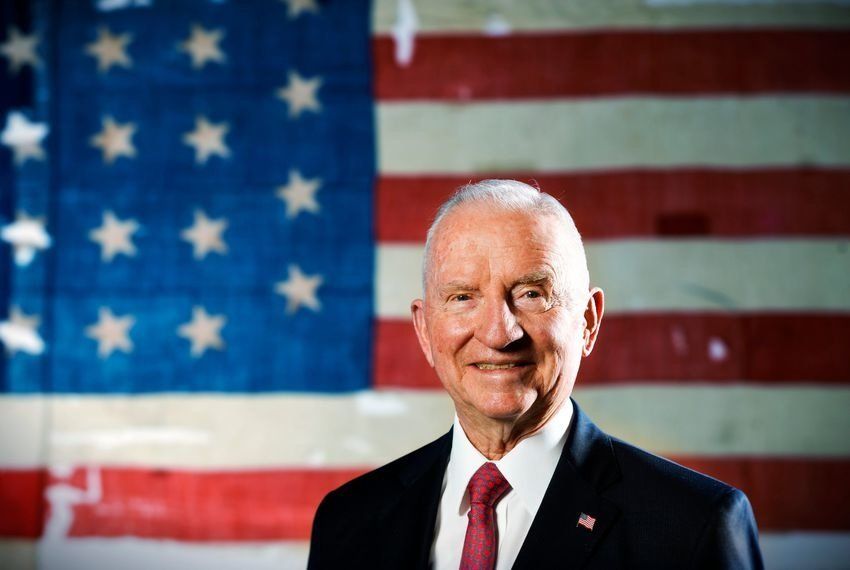 A graveside service this morning will be followed by a memorial service at Highland Park Methodist Church this afternoon.

Family and friends are set to remember H. Ross Perot, the colorful Texarkana billionaire who twice mounted outsider campaigns for president, at services in Dallas today.

A graveside service this morning at a cemetery will be followed by a memorial service at Highland Park Methodist Church in the afternoon. Both events are private but the church service can be viewed via livestream at rossperot.com

Perot died July 9 at his Dallas home. He was 89. Perot founded computer services giant Electronic Data Systems Corp. in 1962 and became one of the nation’s richest men.

At the graveside service, the U.S. Air Force will conduct an F-16 flyover in the missing man formation. Perot was known for his support of veterans and the military.

Notable voices offered tributes after learning that Perot had passed away.

"Texas and America have lost a strong patriot. Ross Perot epitomized the entrepreneurial spirit and the American creed. He gave selflessly of his time and resources to help others in our community, across our country, and around the world. He loved the U.S. military and supported our service members and veterans. Most importantly, he loved his dear wife, children, and grandchildren. Laura and I send our heartfelt condolences to the entire Perot family as they celebrate a full life." 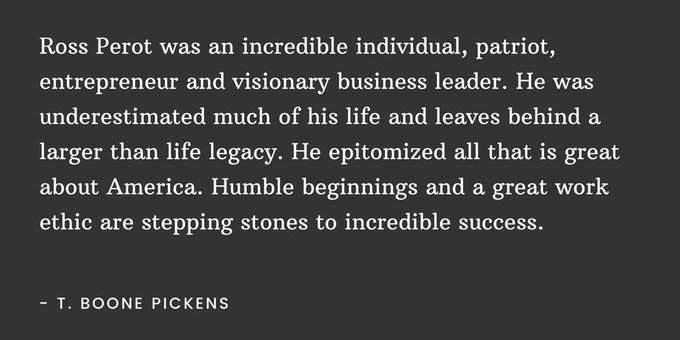 I knew Ross Perot since I was a child, when he let my friends and I ride our bikes across his estate to save time to school. When "tax cuts" was the billionaire mantra, he told me he was happy to pay lots in taxes "because it means I'm doing well."

His wisdom will be missed.

"Ross Perot was a unique figure in American business and politics who lived a full and fascinating life. Although we were opponents in 1992 and 1996, I respected Ross for his support for our veterans, the business he built, and the passion he brought to his politics. He wanted to do something about the big budget deficit and rising national debt, which kept interest rates too high and took too much of middle-class Americans' income. He was a feisty and effective debater, as Al Gore and I can both confirm. We can all be grateful for his enduring patriotism, active citizenship and devotion to our veterans. Hillary and I send our thoughts and prayers to Margot, their children, and grandchildren."

H. Ross Perot had a special place in his heart for The Salvation Army since childhood. Over and over while growing up, he heard the story about how the brother he never knew, Gabriel Ross Perot Jr. — who died of spinal meningitis before Ross was born — would pass a tambourine through the crowd in downtown Texarkana on Saturday nights to collect donations for The Salvation Army.

"The story we all heard about through our childhood was when The Salvation Army band would come down and play," Perot said. "They would give him the tambourine at the end of the concert, and he would pass the tambourine. It was the high point of the Saturday night."