Trump thanks farmers for backing him through China trade war 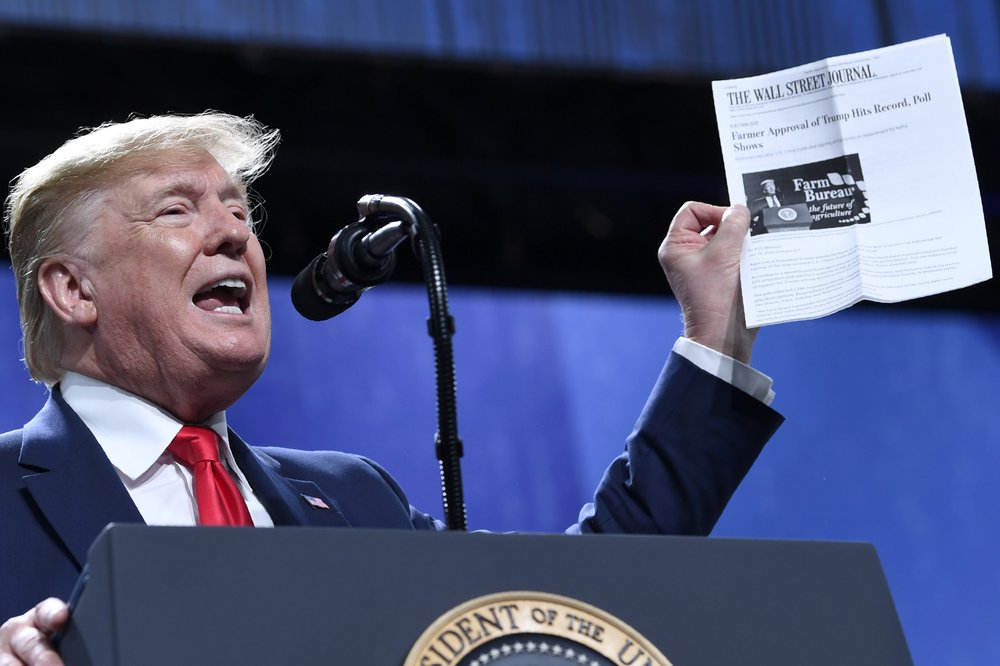 President Donald Trump thanked farmers Sunday for supporting him through a trade war with China as he promoted a new North American trade agreement and a separate one with China that he said will massively benefit farmers.

“We did it,” Trump said, recalling his campaign promises to improve America’s trading relationships with other countries.

At one point during his address to the American Farm Bureau Federation’s convention, Trump said he has strong support among farmers following his signing last week of a preliminary trade deal with China.

When Trump spoke to the American Farm Bureau Federation’s last year, he urged farmers to continue supporting him even as they suffered financially in the fallout from his trade war with China and a partial shutdown of the federal government.

His follow-up speech Sunday at this year’s convention in Austin, Texas, gave him a chance to make the case to farmers that he kept promises he made as a candidate to improve trade with China and separately with Canada and Mexico.

He thanked farmers for staying “in the fight.”

“You were always with me,” Trump said. “You never even thought of giving up and we got it done.”

Trump announced he is taking steps to protect the water rights of farmers and ranchers by directing the Army Corps of Engineers to immediately withdraw a new water supply rule and allow states to manage water resources based on their own needs and what the agricultural community wants.

“Water is the lifeblood of agriculture and we will always protect your water supply,” Trump said.

Trump signed a preliminary trade deal with China at the White House last Wednesday that commits Beijing to boosting its imports of U.S. manufacturing, energy and farm goods by $200 billion this year and next. That includes larger purchases of soybeans and other farm goods expected to reach $40 billion a year, the U.S. has said, though critics wonder if China can meet the targets.

In Austin, Trump described the trade agreement with China as “groundbreaking” and said, “We’re going to sell the greatest product you’ve ever seen."